Yarrow: A Remedy for the Wounded Healer 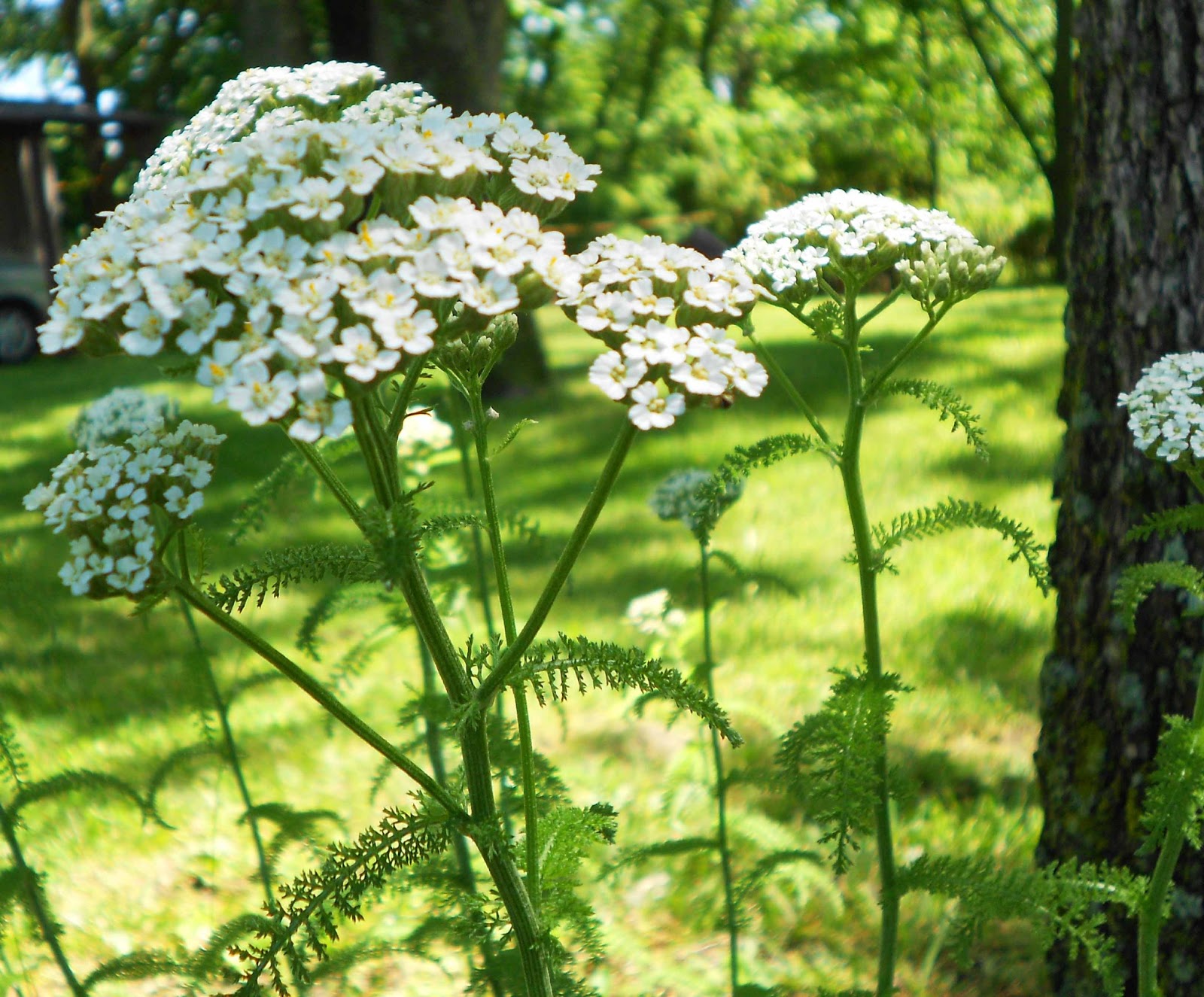 “Brushed back my tears and he said, ‘Girl, we have to soldier on.
Yes girl, even when we don't feel strong.’”
–Tori Amos, The Dark Side of the Sun 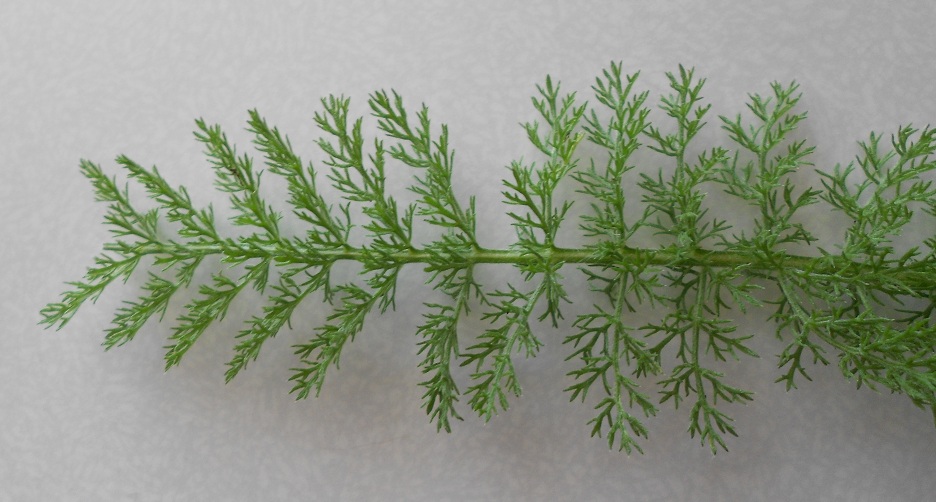 A perennial herb that grows wild in most areas of North America, Yarrow can be recognized in the spring by its delicate, fern-like leaves. In the summer, these give way to tall stalks with a tabletop of flowers that are usually white, but can also be pink. Its medicine is multifaceted; lowering fever, balancing the menstrual cycle, and healing varicose veins are among its internal uses. Also called Woundwort, Yarrow is one of the best herbs to keep on hand for treating injuries, especially deep and bleeding ones. It is also helpful for bruising, and can be used both internally and topically for this purpose. 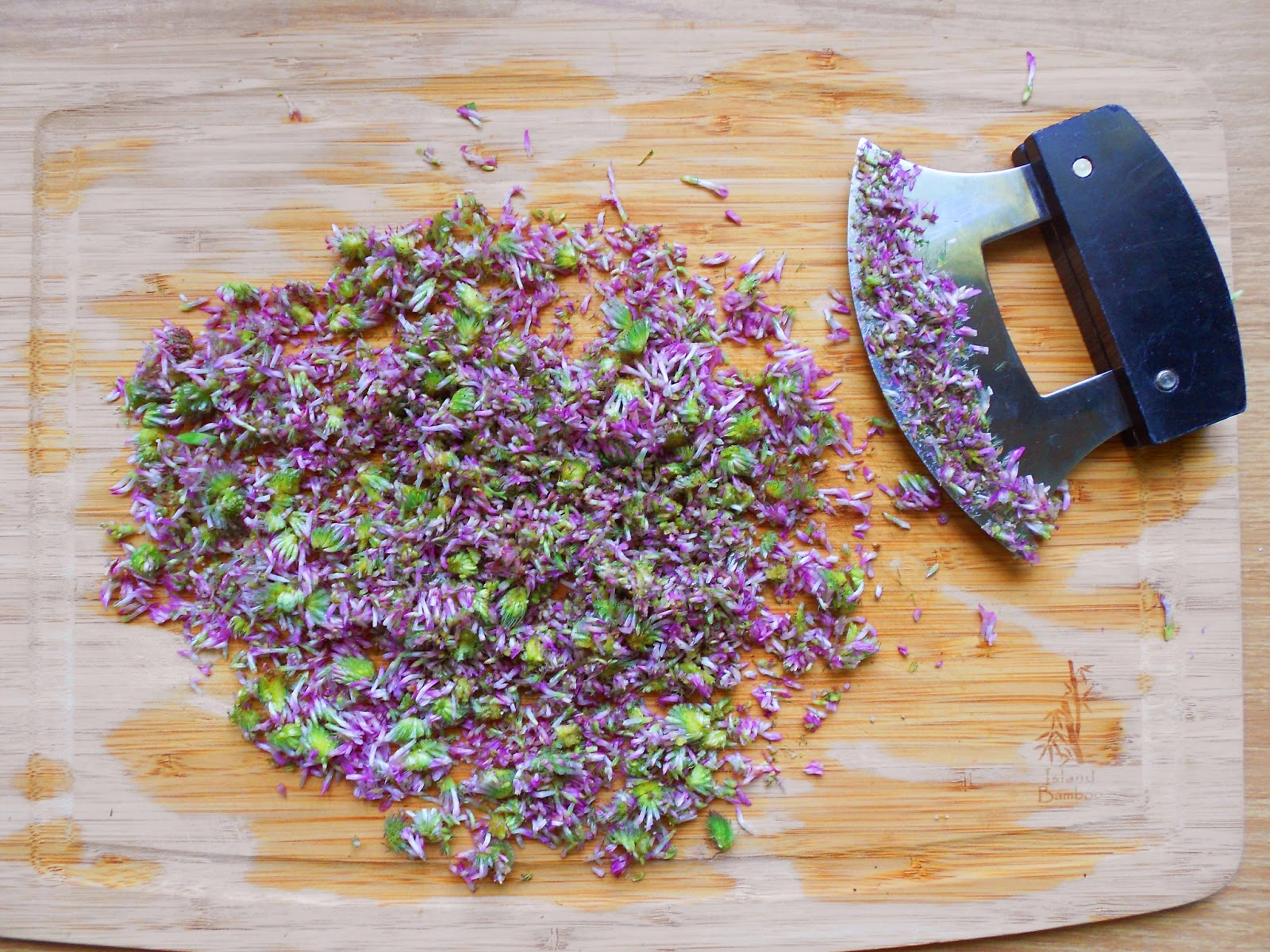 Yarrow’s ability to staunch blood is well-known, but I had yet to experience it myself until last summer. I'd harvested a big batch of Red Clover flowers, and chopped them into fine pieces to macerate for a tincture. My favorite knife to use for cutting herbs (and vegetables, for that matter) is an Alaskan ulu. The curved shape of the blade allows for quicker chopping and makes it easier to apply pressure for tough material like roots. When I finished with the Clover blooms, I brought the cutting board to the sink for a rinse.

I turned the cutting board on its side to fit it into the sink, forgetting that the ulu was still resting upon it. The sharp, heavy knife slid down the board and—ka-chunk—went right into my finger. The cut was fairly deep, so a copious amount of blood issued forth from the wound. I applied pressure, but the bleeding would not stop. My usual routine of applying homemade Healing Salve and a band-aid just wasn’t going to cut the mustard this time.

Holding my finger, I hurried out to the garden and picked a leaf of Yarrow. I bit off the tip of the leaf to chew up for a quick poultice. The taste is a little bitter and almost piney, but definitely bearable. Believe me, Yarrow tastes great when you need it! As soon as the herb poultice hit my finger, the bleeding stopped. The effect was instantaneous, and the blood was permanently staunched. It’s one thing to read about an herb’s swift action, but to behold it first-hand was remarkable. Though I’m a firm believer in the power of plants, Yarrow amazed me that day.

Even more amazing are some of the Yarrow stories told by Matthew Wood in The Book of Herbal Healing. According to him, Yarrow is suitable even for wounds that cut to the bone, as in chainsaw or carpentry accidents. Historically, it has been called “Soldier’s Woundwort” and “Carpenter’s Weed,” and was used during World War I and the American Civil War. Yarrow is especially suited for injuries that are of a quick, violent, or accidental nature.

Interestingly, Wood has also found that Yarrow “has the capacity to act in a deeper, magical fashion” to actually prevent such accidents. He recommends that accident-prone people place a sprig of Yarrow in such places as a toolbox, or perhaps an automobile. “This sends the message that accidents are not welcome. One sprig in the spring and one in the fall is a good measure,” he explains. 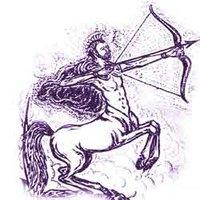 Yarrow has a strong association with Chiron, the wise centaur of Greek mythology. A mentor for many great heroes, such as the physician Aesculapius and the warrior Achilles (from which Yarrow gets its Latin name, Achillea millefolium), Chiron taught others to heal with herbs and with the hands. During a fight between the more brutal centaurs and Hercules, Chiron was accidentally wounded, though he had not taken part in the brawl. This wound, dealt by Hercules, turned out to be incurable; it never healed.

Knowing that his pain would go on eternally, Chiron gave his life to the gods in exchange for the freedom of Prometheus, who was chained to a rock on a mountaintop being pecked by birds—a punishment for bringing the gift of fire to mankind. This selfless gesture greatly impressed Zeus, who sent him to the heavens to shine as a light to guide others. An asteroid discovered in 1977 was named after Chiron, and astrologically it rules philosophy, healing, and holistic understanding.

As such, Yarrow embodies the archetypes of the wounded warrior and wounded healer. These archetypes are similar, because spiritual warriors can be peaceful healers, and healers must sometimes harness warrior energy.  As humans, we are all subject to wounding—emotional, physical, and spiritual. And yet, it is through our own wounds that we gain the capacity to empathize with others. By experiencing pain for ourselves, we gain the desire to relieve the suffering of fellow humans. This is a beautiful truth that lends a sense of purpose to what can seem like the senseless wounds of a harsh world. 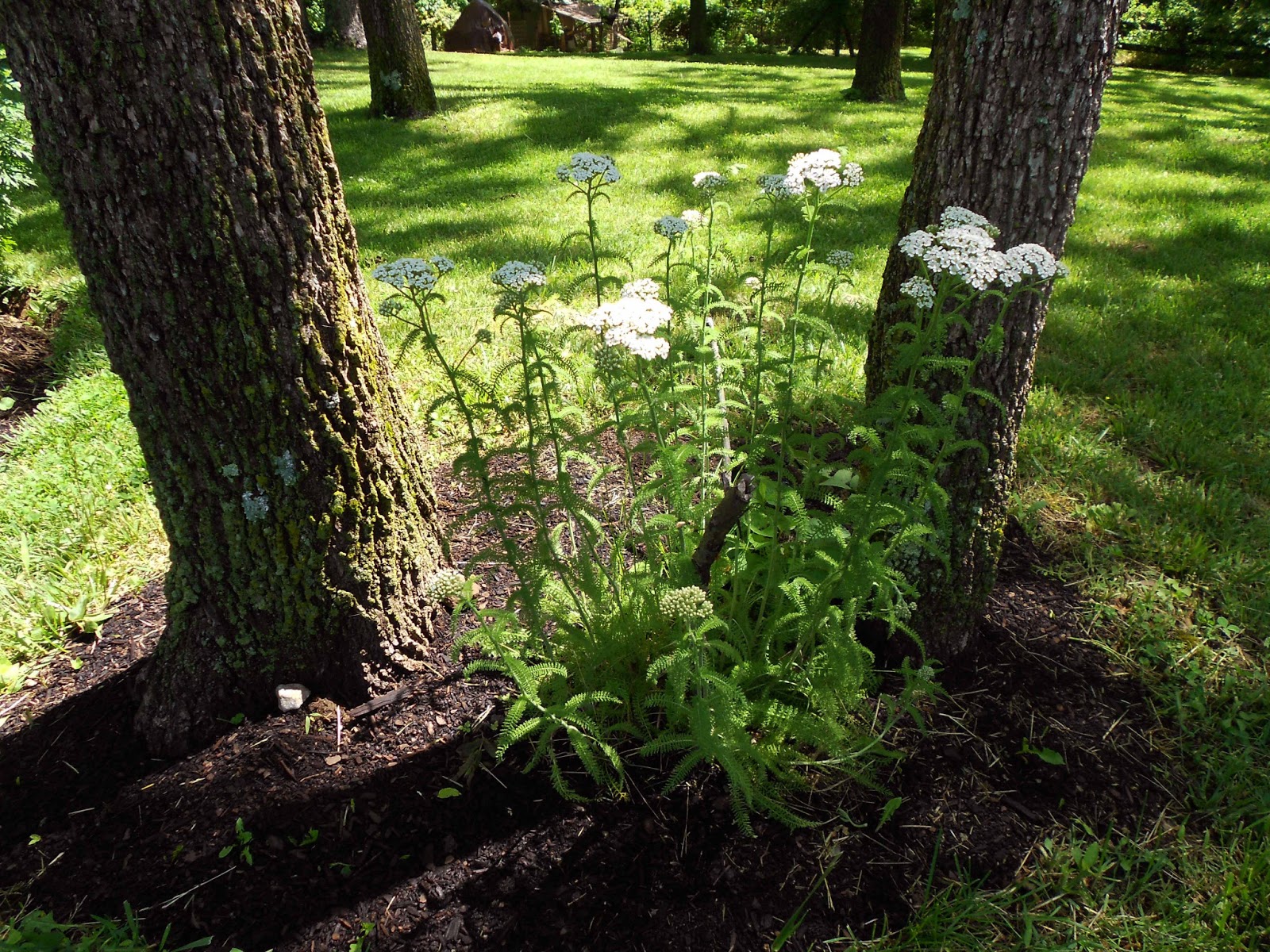 It is interesting that my introduction to using Yarrow for bleeding involved treating a cut I had received while making medicine. That day, I embodied the wounded healer archetype quite literally!

One of the lessons of Yarrow is to maintain our boundaries with other people. The flower essence is used to balance sensitive individuals with porous energy fields, who are able to pick up the "vibes" of others easily. In many ways, this is the gift of natural healers and clairvoyants who can benefit humanity.

However, sensitive people are often subject to extreme levels of empathy and merging with others, so they may have difficulty deciphering which feelings are their own. Yarrow people are prone to quick energy depletion in social situations and are also sensitive to harsh environments. The plant reminds us that even as healers, we must remember to care for ourselves or risk suffering Chiron’s incurable wound. While healing work is a noble pursuit, nobody needs to become a martyr. The world is a very wounded place, so taking it upon yourself to save everybody is a recipe for disaster in your own life.

Yarrow’s flower essence helps to knit the auric energy field so that stronger boundaries can be placed, lending a protective shield. Then, one can experience compassionate, loving awareness toward others without personal depletion. This actually makes for a stronger healer, who can help others more effectively.

The beauty of Yarrow is that this tough plant is readily available in many places throughout the U.S. and Canada. I have often spotted Yarrow in my home state of Indiana, growing in fields and even in people’s lawns as a “weed.” It is easy to grow in the garden, requiring little care. But, it is said that the strongest medicine is made from short Yarrow plants growing in the wild. The less nourished the soil, the more potent the plant. I have seen some sturdy plants in the sandy soil of the Oregon coast, as well as along the rocky riverbanks of Niagara Falls. This tough plant grows everywhere! What a gift, as Yarrow protects us on so many levels.

In my book, everyone would benefit from keeping Yarrow handy, or at least knowing where the nearest patch resides. I can think of some practical, everyday uses for a plant that stops bleeding so easily—how about nicks from shaving, for example? Instead of tearing off little pieces of toilet paper while waiting for the bleeding to stop (and meanwhile becoming late for work), just chew up a bit of Yarrow and watch it stop instantly.

This article hasn’t touched too deeply on the internal uses for Yarrow, but there are quite a few. It is good as a simple cold and flu remedy, especially when a fever is present. Because Yarrow deals with blood in all forms, this plant has an affinity for women, natural care-givers who literally give their own blood as a monthly sacrifice for the procreation of the species. This aspect of femininity is beautiful, but can also be painful, as in the case of PMS and childbirth. Yarrow can help stimulate and moderate the menstrual cycle, ease cramping during PMS, and stop hemorrhaging during childbirth. It is generally recommended that all women, young or old, drink a cup of Yarrow tea from time to time to restore balance to the reproductive system.

The Strength to Carry On

No matter how strong and determined, every spiritual warrior has an Achilles heel—an area vulnerable to wounding. We are all susceptible to occasional suffering and illness. Yet with Yarrow as an ally, we know that our suffering is not in vain. With the help of this Woundwort, we can remain sensitive healers, protected enough to soldier on with our healing path, driven by true compassion.